Water is vital to all forms of life. In its purest form, it's odorless, nearly colorless and tasteless. Our bodies contain about 60 percent water, and we can live for only a few days without it.

Water is an excellent solvent. And, for that reason, essentially all water found in nature contains dissolved minerals. About 97 percent of it is undrinkable because it's saltwater. According to National Geographic, only 3 percent of the world's water supply is fresh water, and 77 percent of that is frozen. Of the 23 percent that's not frozen, only a half a percent is available to supply every plant, animal and person on Earth with the water they need to survive.

In additional to dissolved minerals, most water contains organic matter, micro-biological organisms, and man-made chemicals that be harmful to human health. Without some form of treatment, essentially all water is unfit for human consumption in one way or another.

The water then passes through filters, some made of layers of sand, gravel and charcoal that help to remove even smaller particles and some chemicals. Finally, a small amount of chlorine or some other disinfectant is added to kill any bacteria and other micro-organisms that may remain in the water.

The U.S. Environmental Protection Agency (EPA) has established standards for safe drinking water for some ninety contaminants to be enforced by various state and local environmental and health departments. These standards include categories such as micro-organisms, disinfectants, disinfection byproducts, inorganic chemicals, organic chemicals and radionuclides.

EPA also has established non-enforceable guidelines regulating some fifteen additional contaminants that may cause cosmetic effects (such as skin or tooth discoloration) or aesthetic effects (such as taste, odor, or color) in drinking water. EPA recommends these secondary standards to water systems, but does not require systems to comply. However, states may choose to adopt them as enforceable standards.

In addition, EPA has identified more than one hundred contaminants that are known or are anticipated to occur in public water systems and which may require regulation and monitoring at some point in the future. The list includes, among others, pesticides, disinfection byproducts, chemicals used in commerce, waterborne pathogens, pharmaceuticals, and biological toxins.

For those interested in the details of drinking water standards, EPA has published more than you might care to know here.

What's In Your Drinking Water?

The purity of the water coming from your tap will be affected by a number of factors, including the source of your water, the degree of treatment your water receives and what changes occur in the quality of your water after it leaves the treatment plant before reaching you.

Periodic testing of the short list of contaminants regulated by EPA provides some degree of consumer protection. If your water is supplied by your community, your supplier is required to provide annual Consumer Confidence Reports to their customers. These reports contain information on contaminants found in the drinking water, possible health effects and the water’s source. Water suppliers also must promptly inform you if your water has become contaminated by something that can cause immediate illness.

What we aren’t told is there are thousands of unregulated and unmonitored chemicals in our water systems. This is especially true of water systems that obtain their raw water from rivers and lakes downstream of other cities, industrial facilities and agricultural operations.

These raw water sources may contain any number of toxic chemicals, pharmaceuticals and micro-organisms that are not regulated or even monitored. Untreated storm runoff can be another significant source of harmful contaminants. And many of the more exotic contaminants can pass through conventional water treatment processes with very little reduction.

Keep in mind that water coming out of your tap may not be as safe as that leaving the water treatment plant. After leaving the treatment plant, the quality of your water can be affected detrimentally by formation of disinfection byproducts (such as trihalomethanes, haloacetic acids, bromate and chlorite), by infiltration of contaminants into the distribution system and by leaching of lead and other chemicals from the distribution system into your water.

Water from private wells that serve individuals and small groups is entirely unregulated and unmonitored by local governments, so it's up to homeowners to test and monitor the safety of their water. Well water sources are susceptible to contamination from septic systems, farm animal runoff, and pesticides and herbicides in the surrounding area. Well water also can have high levels of dissolved minerals such as calcium and magnesium which results in "hard" water. 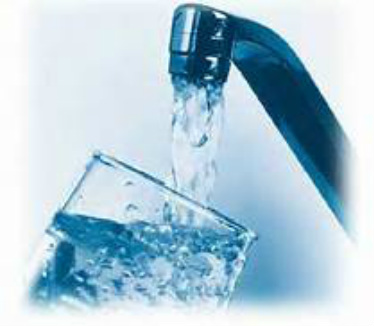 ﻿﻿Recent Studies Are Disturbing
Serious questions have been raised about the quality of our drinking water in the U.S.  A December 2009 compr﻿ehensive study of drinking water quality in nearly 48,000 communities in 45 states and the District of Columbia by the Environmental Working Group found 316 contaminants in the systems tested. More than 200 of these were unregulated contaminants which brings into question the adequacy of the national drinking water standards. And, as time goes on, more and more dangerous chemicals are being produced -- many of which are ending up in our nation's waterways and ultimately in our nation's drinking water.

A more recent 2013 stud﻿y by the same Environmental Working Group concluded there are significant problems with disinfection by-products in our drinking water. The primary recommendation for consumers in this study: "Anyone drinking tap water should use some form of carbon filtration designed to reduce exposures to trihalomethanes, haloacetic acids and other water treatment contaminants."

And another 2013 study conducted by the U.S. Geological Survey and the Environmental Protection Agency (EPA)  found 8 unregulated chemicals in drinking water from more than one-third of twenty-five U.S. water utilities in a nationwide sampling. Some 113 unregulated contaminants were found in some of these water supplies. The 18 contaminants included 11 perfluorinated compounds, an herbicide, two solvents, caffeine, an antibacterial compound, a metal and an antidepressant. Although the contaminants found were in relatively low concentrations, there is some cause for concern as little is known about the long-term consequences of low-level exposure to these chemicals.

Another disturbing EPA study, published in February 2014, found that nearly half of water faucets sampled across the United States tested positive for the bacteria that causes Legionnaires’ disease. Legionnaires’ disease is a severe form of pneumonia that causes chills, fever, headache, a cough and more. It can be deadly. Although researchers sampled only 67 public and private water sources, such as kitchen sinks and drinking fountains, it’s the first study to document the presence of the potentially deadly bacteria in water taps. According to the EPA, the organization that conducted the research, 32 taps contained the bacteria, and 11 of those contained it in multiple samples.

And yet another recent article by the former director of the U.S. EPA Drinking Water Standards Division, published in May 2014, concluded "Pathogenic microorganisms such as legionella frequently colonize water plumbing systems, and they now are the most significant public health risk associated with drinking water. Many illnesses and deaths are attributable to that problem and drinking water standards are not designed to deal with them."

﻿Bottom line﻿: There’s no good answer concerning what’s in your drinking water. Even those operating your water treatment plant don’t know -- either because tests are not required to be performed for many of the more exotic contaminants or because testing methods simply don’t exist for a vast majority of the tens of thousands of known possible contaminants. The sad truth is most of the time no one is testing most of the water for most of the contaminants.

Siimple filtration of your tap water can dramatically reduce or even eliminate many chemical and micro-biological contaminants. Water filters, perhaps with other purification processes such as reverse osmosis, can provide a safety factor for those who might be vulnerable to disease and health effects from waterborne contaminants. This is especially important for infants, the frail elderly, pregnant women and their fetuses, people undergoing chemotherapy or living with HIV/AIDS, transplant patients and others with compromised immune systems.
More About Drinking Water Contaminants
More About Drinking Water Purification
Visit Our Store & Shop Now
© Copyright 2014-2022 SafeWaterEssentials.com  All rights Reserved